The government has handed down the 2017-18 federal budget. Here are some of the relevant highlights for financial advisers.

The federal budget has hit the major banks with a $6.2 billion levy as well as new powers for APRA to strip senior executives of their bonuses.

Banks will also be held to account if they try and hide misconduct by executives with new mandatory reporting requirements, said the government. Financial institutions that are in breach of the misconduct rules also face fines, starting at $50 million for small banks and $200 million for large banks.

The creation of a new external dispute resolution body has been announced, designed to give Australians a “simpler, more accessible” way to resolve disputes with banks, super funds and other financial institutions.

The Australian Financial Complaints Authority (AFCA) is intended to improve competition and accountability among financial institutions.

The government has said it will reduce the tax burden on small businesses, while also imposing a levy for those that sponsor migrants.

Small businesses with a turnover of up to $10 million will also be able to immediately write off expenditure up to $20,000 for a further year to 30 June 2018. Further, the government intends to cut red tape for small businesses by providing $300 million over two years to states and territories.

At the same time, the government said it will require companies to pay a levy if they sponsor migrant workers. This levy will be used toward the “Skilling Australians Fund”, which will pay for the training of Australians.

A plan has been put forward aimed at reducing pressure on housing affordability, including greater incentives for first homebuyers and downsizers as well as tougher rules on foreign investment.

From 1 July 2017, a First Home Super Saver Scheme will be introduced allowing individuals to make voluntary contributions of up to $15,000 per year and $30,000 in total to their superannuation account to purchase a first home.

The budget has included changes to increase competition in Australia’s fintech sector, making it easier for small businesses to raise capital and allow businesses to test a wider range of financial products without a licence.

The government will also be introducing a “world-leading” legislative financial services regulatory sandbox.

The government has announced funding for a range of new infrastructure projects across Australia as well as the establishment of a new rail program, a regional growth fund and an infrastructure financing agency.

The federal government still anticipates meeting its slated return to surplus in 2020-21, despite the projected deficit for this year rising slightly.

The projections come despite the government deciding to jettison $13 billion in savings measures previously embarked upon by the Coalition government under the previous leadership of former prime minister Tony Abbott and treasurer Joe Hockey.

The government also announced its intention to cease reliance on debt as a crutch for welfare, health and education expenditure, instead initiating a $21 billion tax hike over the next four years, to be funded in significant part by a $6.2 billion levy on the liabilities of CBA, ANZ, NAB, Westpac and Macquarie. 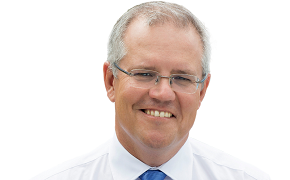