Controversial South Australian senator Cory Bernardi has laid out his vision for a deregulated financial services market and his pitch that IFAs are a natural ally.

In a wide-ranging interview with ifa on the sidelines of the AIOFP conference on Hamilton Island, Mr Bernardi – who defected from the Liberal Party in February to establish the Australian Conservatives party – said the current regulatory approach to financial advice has failed.

“The greatest form of governance is self-governance, and if advisers do the right thing and firms do the right thing, then everyone will benefit,” he said. “You’re never going to stop the rogues in this business, no matter how many rules and regulations you put in.”

Having been a stockbroker and self-licensed financial adviser in his life before politics, the senator said he has an understanding of business and the financial services sector that too many politicians lack.

Rather than introduce laws that hamstring all advisers, Mr Bernardi suggested the government focus on punishing wrongdoers instead.

Though he stopped short of announcing his party’s approach to specific regulations such as FOFA and LIF – explaining that specific policy platforms will be a matter for the party membership – he said he would commit to reducing red tape unlike his former colleagues in the Coalition.

“[The Australian Conservatives] have a deregulation policy,” he said. “I wish the government would bring back the deregulation days. There’s just too much compliance and the world is not better for it.”

Asked whether he was supportive of the government’s financial services agenda when he was on their benches, he said he was sometimes “critical” of the approach in within the party room but that in politics “you need to pick your battles”.

Though he talks a strong game on deregulation, Mr Bernardi has become an unlikely – if unenthusiastic – supporter of a royal commission into the banks.

“The big banks, I think, it seems there’s an inevitability about a royal commission into those now. I think it will happen,” he said.

When pressed about the Australian Conservatives' policy regarding a royal commission, his answer was somewhat surprising given his traditional opposition to government intervention in the economy.

“It’s something I have never supported previously, but I find it hard to argue against given the money laundering allegations against the Commonwealth Bank,” he said. “The momentum just seems to be there now.”

Reflecting on a very different inquiry that has already been held – the Royal Commission into Trade Union Governance and Corruption, which was concluded in 2015 – Mr Bernardi said he does think the relationship between industry funds and the labour movement still requires further analysis.

The senator also took aim at the government’s plans for an amalgamated dispute resolution scheme for the financial services sector, calling the creation of AFCA a “faux pas”.

Commenting on the ifa article featuring a financial adviser calling on others join the Australian Conservatives, Mr Bernardi said he believes small business owners, particular in the IFA sector, are a natural ally.

He said he would be willing to “look at” the issue of ASIC’s section 923A clarification and champion the cause of independently-owned advisers, following a strong reception from delegates to the AIOFP conference, a number of whom have recently joined Mr Bernardi’s rank-and-file.

Asked whether the social and cultural side of his party’s agenda may turn off many prospective members from the business community, the senator offered a straight response.

“Look, I know it does,” he said. “I know there are people who don’t share the social views, such as [opposition to] same-sex marriage for example. That’s OK. You don’t always have to agree with your spouse let alone a political party.”

He suggested that business owners should ask themselves how many of a party’s policies it agrees with, and that they may find themselves more aligned to a cross-bench party than one of the two majors.

“If you’re with [a party] every three out of 10 times then that’s better than the alternative,” he said.

More broadly he called on people with business experience to engage in the political process rather than be turned off by the sometimes-toxic nature of its discourse.

“We need more people in politics that actually understand business and specific aspects of business,” he said. “Government should be a friend of the people, not its enemy. I don’t think it’s an ally right now.” 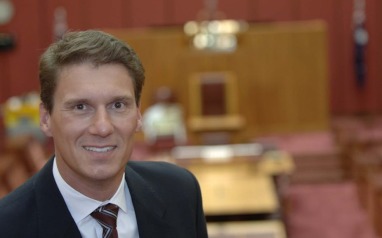