Standard & Poor’s action is of potential concern for insurance companies that are required to follow the Life and General Insurance Capital Standards introduced by APRA in 2013.

Standard & Poor’s Global Ratings (S&P) placed Australia’s AAA rating on outlook negative on 7 July, which implies a one-in-three chance of a ratings downgrade within the next two years. As a result, the rating agency also revised the outlook from ‘stable’ to ‘negative’ on the Australian major banks’ AA- ratings and on the AAA ratings of the state governments of New South Wales, Victoria and the ACT. The main trigger for S&P’s action is the current political situation and the ability to implement budget measures to reduce Australia’s deficit over time.

S&P’s action is of potential concern for insurance companies that are required to follow the Life and General Insurance Capital (LAGIC) Standards introduced by the Australian Prudential Regulation Authority (APRA) in 2013. The credit stress portion of LAGIC’s overall asset risk charge (ARC) is rating-based so any downgrade of the Australian major banks and state governments would have consequences for life and general insurers under the existing legislation.

It is possible that APRA might adjust the current LAGIC rules to account for a downgrade. However, in the absence of any adjustment, we have conducted analysis on a model portfolio to assess the potential outcomes for life and general insurers should a downgrade occur.

LAGIC implications could be significant

The credit spreads stress under LAGIC’s ARC measures the impact on the capital base of an increase in credit spreads and the risk of default. The stress applies to interest-bearing assets, including cash deposits and floating-rate assets, as well as credit derivatives and bank bills.

A downgrade of the sovereign rating will have an impact on the semi-government authorities and the domestic banks, which all receive some rating uplift due to implicit support of the Commonwealth.

Currently, AAA-rated state governments are zero risk weighted under LAGIC’s credit spreads stress under the Tier 1 (government) counterparty grade. However, under the existing legislation we believe that NSW, Victoria and the ACT will move to a Tier 1 (other) counterparty grade on a downgrade of the sovereign, incurring risk charges. This would have a substantial impact on insurers’ credit risk scores.

Given that the major banks are also likely to be downgraded, this would move them from a Tier 2 to a Tier 3 counterparty grade risk. The impact, although not as great as the loss of the zero risk weighting on the AAA-rated states, will still be material.

Under the current ratings, the LAGIC credit stress charge would be approximately 2.15 per cent. However, this would increase markedly under both of our increased stress scenarios.

Scenario 1 assumes that Australia is downgraded to AA+ and that the AAA-rated state governments are also downgraded to AA+, with the existing AA-rated states remaining unchanged and the banks being downgraded to A+. It also assumes that APRA maintains the current zero risk weight for government bonds, as well as the one-notch uplift for semi-government bonds. In this scenario, the previously AAA-rated states are reduced to a Tier 1 counterparty grade and the major banks are reduced to a Tier 3 grade. The impact on the LAGIC credit stress charge from this scenario would be a 29 per cent increase in capital use.

Scenario 2 assumes a worst case outcome where even government bonds are reduced to a Tier 1 counterparty grade, thus incurring a credit charge, with the state governments also at Tier 1 and the banks at Tier 3. In this scenario, the capital increase would be around 52 per cent.

Potential options for insurers in the event of a downgrade

Currently, there is little an insurer can do to avoid an increased LAGIC credit charge without APRA amending the rating tiers, particularly if they wished to maintain their current asset allocation. There are potential courses of action that could help minimise a credit charge increase, such as to maintain interest rate duration through the use of derivatives, while reducing credit duration by owning shorter maturity securities. However, this is likely to reduce portfolio income, which at a time of already low yields might be unpalatable.

Given the potential for a significant increase in the LAGIC capital charge, we believe it would be in most insurers’ interests to enter into discussion with APRA about the consequences of a downgrade before it happens. It may be the case that APRA will consider amending the rating tiers should this occur. At the same time, we think it prudent for insurers to be exploring the potential outcomes for their portfolios with their asset manager, as well as possible strategies for managing any changes. 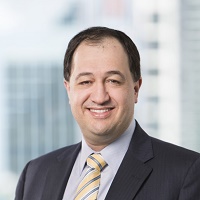