Medium growth superannuation funds are down by some 5 per cent for this financial year to date.

The magnitude of recent market fluctuations has pushed medium growth superannuation funds into the red, but according to market pundits, the final result could be materially different given currently high volatility.

While super funds recorded a 1 per cent decline in May, things have “worsened significantly” since then, according to Chant West.

In fact, the considerable beating the share and bond markets experienced in the first half of June, have translated into heavy losses with Chant West estimating the median growth fund return now sits at about -5 per cent.

The share market plunge will undoubtedly weigh on superannuation returns for this financial year, AMP’s Shane Oliver said. As such, the chief economist has predicted the worst financial year loss for balanced growth superannuation funds since the Global Financial Crisis.

But while the forecast is bleak, Dr Oliver and Chat West’s senior investment research manager, Mano Mohankumar, are both urging investors to resist hitting the panic button.

“People need to see things in context. A negative result would be only the fifth in 30 years since the introduction of compulsory super in 1992. And remember that this year’s result comes on the back of the outstanding 18 per cent return in FY21, the second best in the history of compulsory super,” Mr Mohankumar said.

“Fund members can also take comfort in the fact that, even after factoring in the large losses in June to date, the median growth fund is still 5 per cent ahead of the pre-COVID high at the end of January 2020. More importantly, funds are continuing to meet their long-term return objectives with a comfortable margin to spare,” he added.

The experts warned that attempting to time markets is a risky proposition.

“Selling shares or switching to a more conservative superannuation investment strategy whenever shares fall sharply just turns a paper loss into a real loss with no hope of recovering,” Dr Oliver said.

“Even if you get out and miss a further fall, the risk is that you won’t feel confident to get back in until long after the market has fully recovered. The best way to guard against deciding to sell on the basis of emotion after falls in markets is to adopt a well thought-out, long-term strategy and stick to it,” he continued.

“Most members can afford to remain patient and, if you’re thinking about withdrawing money or switching to a less risky option, we strongly encourage you to seek financial advice before doing so.”

Looking back at the past two decades, which have included three major share market downturns – the ‘tech wreck’ in 2002–2003, the GFC in 2007–2009 and COVID-19 in 2020 – the median growth fund has returned 7 per cent per annum, which, Mr Mohankumar stressed, is still well ahead of the typical return objective.

A negative return in FY22 would only be the fifth time in the history of compulsory super that the median balanced fund has suffered a financial year decline.

And while it’s still too early to say that markets have bottomed, the economists noted that years of negative super performance have typically been followed by a bounce back in returns. 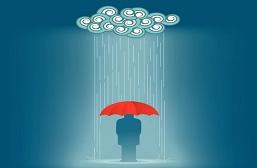