“In [the UK], to be a financial adviser, you’ve got to be independent. You can’t be attached to a company,” Mr Williams said.

“If that was to come to Australia, I would not be disappointed.”

However, legislation would be required to achieve it, Mr Williams said, and there is not enough political will for such a move.

But that may change with the outcome of the life insurance inquiry, he said.

Moreover, Mr Williams said he believes the recently reintroduced Life Insurance Framework (LIF) bill will be “done and dusted” and go through Parliament without any controversy.

He said he does not expect anyone to oppose the LIF bill in the Senate, noting that 80 per cent of legislation goes through unopposed.

“When it gets to the Senate, I don’t expect it to be a huge tidal wave. I think it’s tidying the industry up and improving the industry, and I think the Senate will take it pretty well,” Mr Williams said.

“I’m sure that, with [Minister for Financial Services] Kelly O’Dwyer’s work with [Shadow Treasurer] Chris Bowen and others on this issue, that will be the case.

“I think that will be done and dusted. It’s not controversial.” 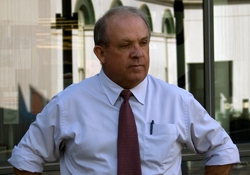