What can Enron teach us about conflicted advice?

If the persistent problems around conflicted financial advice in this country are going to be properly addressed, we should perhaps look towards one of the most epic corporate failures in history.

Recently, Professor Sunita Sah of Cornell University submitted an academic paper to the Hayne royal commission that aimed to examine the nature of conflicts of interest and disclosure in advice and how they could be best addressed.

The paper then asked whether further education and training was an appropriate response to conflicted advice. Professor Sah noted that educating people on biases increases awareness of bias but is quite often ineffective in decreasing the level of bias.

That finding is sure to please the many critics of FASEA, many of whom populate the comments section of practically every ifa story that mentions the industry body.

But what struck me was not that it found education to be ineffective in decreasing the level of bias in advice.

Rather, what interested me was that it cited the example of failed energy-trading and utilities company Enron to prove that point. Professor Sah wrote:

“Indeed, Enron’s 64-page Code of Ethics booklet did not prevent the ethical failures of many employees within that institution. A systematic analysis of the organisational culture at Enron demonstrated how the culture of an organisation can have profound effects on the ethics of its employees despite the existence of codes of conduct, corporate social responsibility initiatives, ethics officers, etc. It is the “deep” culture of the organisation that matters.”

Anyone who’s watched the documentary The Smartest Guys in the Room (something I highly recommend) would know the story of Enron. For those who don’t, here’s the (very abridged) story.

The company was founded in 1985 as a merger between small regional companies Houston Natural Gas and InterNorth. At its peak in 2000, it employed almost 30,000 staff with claimed revenues of nearly $101 billion.

A key word in that last sentence is ‘claimed’. In 2001, Enron’s financial position was found to have been sustained by institutionalised, systematic and creatively planned accounting fraud. It filed for bankruptcy not long after.

The Enron scandal then became a factor in US Congress passing the Sarbanes Oxley-Act in 2002, which limits the ability of accounting firms to provide both auditing and consulting services to the same client.

Interestingly, Professor Sah’s paper cited the Sarbanes Oxley-Act as an example of how to eliminate incentives that create conflicts of interest and the potential of biased advice.

Which leads to another finding in the paper that struck me – even the most well-meaning adviser is not immune to bias, even subconsciously.

It just means that they are human. Humans are inherently biased creatures, and no amount of education, training or guidelines will ever change that. Education will not solve cultural problems no matter how effective the lessons are taught.

Education will not solve conflicted advice. Good policy intervention will.

Regardless of what we end up finding in the final report of the Hayne commission, one thing it has achieved is it has provided a once-in-a-generation opportunity to push the reset button on an industry desperately in need of a do-over.

But maybe delving deeper into understanding the cultural failures surrounding one of the biggest corporate failures might be a good place to start.

What can Enron teach us about conflicted advice? 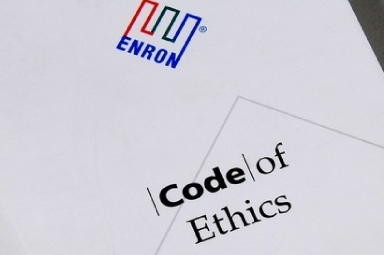