Conflicts within the financial advice industry mirror widening fissures in broader culture and electoral politics between elites and regular folks.

Earlier this month we saw the one year anniversary of Donald Trump’s election as President of the United States. Having been based there at the time, and in the battleground states of Ohio and Pennsylvania in the immediate aftermath of the vote, I saw first-hand just how divided the country was.

Mall-dwelling Middle Americans across the map feel increasingly distant from the law-making and wine-swilling elites in Manhattan and Washington, DC, a cultural divide that no doubt impacted the verdict in that monumental election.

Though it is subtler and less violently expressed, Australia is also undergoing a similar cultural malaise and misunderstanding between tribes, as was evident in the demographic responses to the same-sex marriage postal survey.

The financial advice industry has not been immune.

We see it played out most presciently in the education and regulation debates. As all eyes turn to FASEA, the issue of mandated standards (and exactly what those standards might ultimately be) continues to draw two very different responses.

The first camp of advisers, those that see themselves as part of an emerging or already-existing “profession”, welcomes the new regime with open arms.

Some do so because they believe higher levels of formal education are necessary for the industry to professionalise and they believe it will lead to better client outcomes.

Others believe it will provide advantageous optics, helping to reform and restore the industry’s standing in the eyes of consumers turned off by scandal.

Others yet – the more self-serving in the cohort – already have the qualifications that will likely be set as mandatory, thereby wallowing in the enviable comfort of not having to do anything.

They are supported by their industry associations – the FSC, AFA and FPA – who have (after some internal struggles) ultimately decided to not only support the government’s approach but also to actively assist the transition, providing compliant educational courses to members for a fee.

Advisers in the second camp continue to bristle about the new professional standards regime and the nature of the way it has been brought about.

Some worry about the cost that additional education would impose on their business and their clients. Some believe that formal education has no bearing on quality of advice or ethical service provision.

Others feel betrayed that their representative associations sided with the first camp, lining their own pockets in the process. Others oppose the mandatory standards on philosophical grounds, believing it to be beyond the appropriate scope of the state.

The two camps responded very similarly to the Life Insurance Framework and to FOFA before that, with a lot of the same underlying issues of professionalism and politics. There are many potential reasons for the natural splintering of the industry into these two factions, but anecdotally, the most potent seem to pertain to geography and class.

It also has much to do with the clientele their business seeks to serve. It is easy to support professional standards and government regulation if your business is immune to much of the fallout.

Many in the first camp are CBD-dwelling, suit-wearing advisers increasingly surviving on high-net-worth individuals and moving further and further in that direction.

They have built fee-for-service models predicated on the pre-existing wealth of their clients and they have educated themselves in the process, with no shortage of CPD events to attend just downstairs or down the road.

Their response may be the one that on face level presents the industry in a better light to outsiders, eager to co-operate with government and atone for the sins of the past.

But it also shows a shocking lack of compassion for their fellow advisers and their clients.

Many in the second camp service rural, regional and outer-suburban areas.

They are trying their best to provide financial advice and insurance products to regular Australians who need it, even though regulation has made it increasingly difficult to service this segment of the market, as Daniel Parry of Sentry Group reminded us recently in no uncertain terms, telling the AGBA conference that advisers should focus on the wealthy since government policy has blocked “poor people” from advice.

The rising red tape and state-mandated education standards may not be too onerous an imposition if you work on Collins Street or have a view of Sydney Harbour from your office.

But for the advisers working hard to keep servicing regular folks, every dollar and hour counts. A little more understanding and a little less sanctimony would go a long way to healing divisions in this industry.

Ignoring the second camp and excluding them from the conversation will have dire consequences. Just ask Donald Trump. 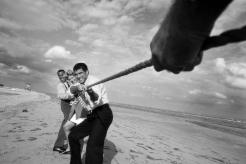