In contrast to the negativity and ignorance that public figures can sometimes display when discussing financial advice, Bob Geldof’s message to the profession was refreshingly informed.

The financial services trade press is one of the more heated and competitive niche industries in Australia. But if anyone is qualified to broker a peace, it is Sir Bob Geldof.

On Friday, ifa was invited, alongside a select few competitors, to sit down with the founder of world-changing charity events Band Aid and Live Aid following his keynote address to the AFA national conference on the Gold Coast.

Far from my prejudiced preconceptions of Geldof as a smug and sanctimonious old rocker in the mould of his fellow Irish peacenik Bono, what we discovered was a truly inspirational thinker, with very real messages of relevance for the financial advice community.

Unlike some big names of the global speaking circuit, Sir Bob had clearly done his homework.

“I know you guys are dealing with things like automation and robotic investment,” Sir Bob explained. “But people will always need fundamental existential things as to how to manage their lives.” He said this was even more important as we approach a major generational wealth transfer.

Where many in the pantheon of rock gods often display a knee-jerk anti-private sector ethos, Sir Bob was unashamedly pro-business and pro-advice. While he did warn delegates that the current anti-elitist Trumpian zeitgeist posed challenges for all subject matter experts, overwhelmingly his view was that trusted professionals will prevail.

He explained to us that growing up poor on the then-mean streets of Dublin, he was conscious of the importance of financial stability early.

“When we launched [rock band] the Boomtown Rats and got signed, the first thing we did was go and set up these elaborate tax structures since we were convinced we were going to be mega-rich,” he explained.

In reality, financial success did not come for many decades, but he had learned financial life lessons early and they had stayed with him.

Asked by ifa whether he would encourage young musos or entertainers to seek professional advice, he responded: “Well I would if they make any money”, with just a shade of bitterness, perhaps the relic of mistakes made over a long career.

More broadly, Sir Bob offered a view of the world that was refreshingly libertarian, sceptical not just of dictators and autocrats (he listed Trump and Turkey’s Recep Tayyip Erdogan as particular worries), but also of government itself.

“Governments are the least adept at adaptation,” he said. To an audience that has lived through FOFA, LIF and an opaque new professional standards regime, it was a message well received.

In our private chat following the speech, Sir Bob made clear that his understanding of the global financial system was fairly sophisticated, while at the same time he did not hold back.

“The system is a Ponzi scheme,” he argued, levelling particular anger at the central banker tactics of quantitative easing. “I see no difference between QE and Bernie Madoff.”

Sir Bob’s free market credentials even trumped those of Peter Costello, arguably the most successful deregulator in Australia’s history.

Upon hearing the news that the former federal Treasurer and Future Fund chairman has suggested the government take responsibility for overseeing the default super system, Sir Bob was emphatic.

“Fuck off,” the former rocker spat rhetorically on stage in response to the suggestion.

With government intervention in the private sector, including the financial services industry at historic levels currently, small business owners need all the champions they can get.

Who knew Bob Geldof was one of them. 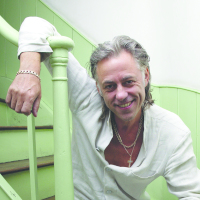 The legislation will take effect from next week. ...