A Labor government will initiate further changes to the regulation of the superannuation system if elected, shadow treasurer Chris Bowen has said.

Speaking at a breakfast event organised by the FSC and BT, Mr Bowen said a Labor government will “absolutely” make further changes to the superannuation system, though added these would not be tax-related.

“We’ve reached the end of what I would call our taxation changes,” he said.

“We’re thinking about gender equity and other issues, and we fear the government will delay the next increment increase in the superannuation guarantee, and we won’t be agreeing to that, but I regard them as separate to superannuation tax changes, those are positive changes we’re continuing to work on.”

According to Mr Bowen, the changes would only impact a minority of Australians but would offer significant savings to the public purse.

“The political problem facing us is that the vast majority of pensioners were unaffected, 90 per cent of Australians were unaffected, but because of scare campaigning many thought they were affected,” he said.

Mr Bowen added that dividend imputation was a positive feature of Australia’s financial system and should not be removed, but the ability for shareholders to receive cash refunds for excess imputation credits is “simply unaffordable, and not justifiable in policy terms”.

“Dividend imputation in itself, in the 1987-2000 model, avoids double taxation, and that should be avoided, that’s the right model. It’s transformed the way capital is formed in Australia,” he said 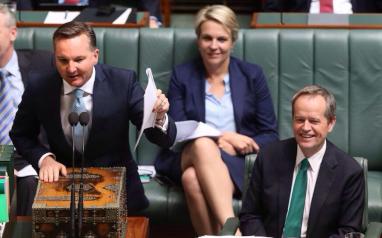