The four major banks, IOOF and AMP, have endured a net-loss of advisers in January, according to Bell Potter analysis of the latest ASIC data.

In an email to subscribers reflecting on ASIC data, Bell potter analyst Lafitani Sotiriou said, cumulatively, the four major banks, IOOF and AMP have lost 92 advisers, with each individual business in a net-loss.

“It was the worst percentage loss over the period, which is consistent with our thesis that the adviser losses are worsening,” Mr Sotiriou said. 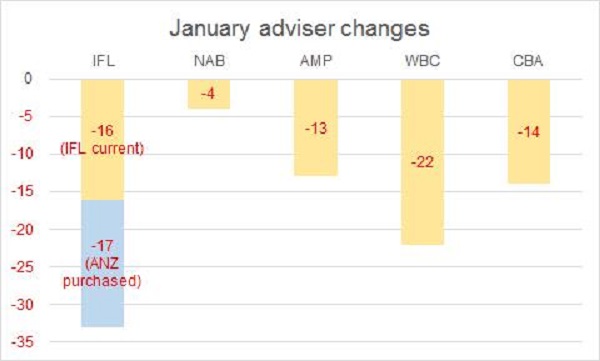 “ANZ Wealth has now lost 43 advisers since the IFL acquisition was announced – equivalent to -6 per cent – with still approximately 10 months still to go before IOOF even gets the asset,” Mr Sotiriou said.

“We reiterate there is significant risk to this transaction and to be very cautious on IOOF.”

Westpac also had “a terrible month”, Mr Sotiriou said, recording its second-worst adviser losses in more than 12 months and bringing the bank’s adviser numbers to less than 1,000 “for the first time in many years”.

The company said it “continues to see significant risk for the likes of IOOF and AMP”, but added that “this move to independence should continue to support the independent platform space”.

Mr Sotiriou expressed similar concerns over ANZ Wealth’s loss of advisers in December 2017, warning that if the dealer group continues to lose advisers at its current pace, IOOF will receive 130 fewer advisers when it finally gains control of the business.