The prudential regulator has been unsuccessful in its attempt to take legal action against a major institution one month after ASIC lost its responsible lending case to Westpac.

In her judgement, Ms Jagot said the prudential regulator simply did not have enough proof that the IOOF directors contravened the Superannuation Industry Supervision Act (SIS Act) by failing to act in the best interests of members.

“The court held that IOOF’s APRA-regulated entities and the five individuals did not contravene the Superannuation Industry (Supervision) Act 1993 (Cth). The court also declined to make the disqualification orders sought against the five individuals, and awarded costs in IOOF’s favour,” the company said in a trading update.

Mr Kelaher and chairman George Venardos stepped down from their roles after APRA launched the legal action and disqualification proceedings against the wealth giant in December last year.

APRA deputy chair Helen Rowell said that she was “disappointed with the decision” but noted that the case examined a range of legal questions relating to superannuation law and regulation that had not previously been tested in court, relating to the management of conflicts of interest, the appropriate use of super funds’ general reserves and the need to put members’ interests above any competing priorities.

“Litigation outcomes are inherently unpredictable, however APRA remains prepared to launch court action – where appropriate – when entities breach the law or fail to act in an open and cooperative manner. APRA still believes this was an important case to pursue given the nature, seriousness and number of potential contraventions APRA had identified with IOOF,” Ms Rowell said.

Additional licence conditions that APRA imposed on IOOF in December are unaffected by today’s judgment and remain in force.

Despite the decision, Ms Rowell said APRA’s tougher approach to enforcement had led to IOOF being better placed to deliver sound, value-for-money outcomes for its members.

“APRA has seen significant improvement in the level of cooperation from IOOF since this case was launched. Additionally, the new licence conditions have enhanced IOOF’s organisational structure and governance, including the role and independence of the trustee board within the IOOF group. This will better support effective identification and management of future conflicts of interest,” she said.

APRA’s defeat comes after ASIC lost its landmark responsible lending case to Westpac last month. Both regulators were slammed by the royal commission for failing to litigate against major financial institutions.

On the day prior to IOOF’s victory in court, APRA chairman Wayne Byres emphasised the regulator’s tougher stance against super funds and explained how APRA would be taking a more aggressive approach.

IOOF shares rallied by more than 8 per cent on Friday to hit a four-month high of $6. 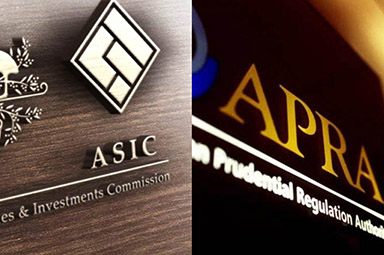