Losing the seat of Wentworth has left the Morrison government open to making “significant” changes to the controversial FASEA reforms.

That’s according to AIOFP executive director Peter Johnston, who, together with financial advisers, met with seven Coalition politicians in Canberra this week to explain the issues with implementing new educational requirements for financial advisers.

Mr Johnston told ifa there are more than 1,500 financial advisers including their support staff living in the seat of Wentworth. He noted that following the loss of the constituency at Saturday’s byelection, Coalition MPs have grown fearful of losing their seats at the next federal election.

“We had a better than expected meeting with seven Coalition politicians at Parliament House on Monday,” Mr Johnston said.

Mr Johnston said six financial advisers were also present at the meeting in Canberra this week.

“Our chair, Dr Adrian Raftery, did a great job explaining the logistical problems with delivering the education demands from the universities perspective,” he said.

The AIOFP leader said he made the Coalition aware of the negative political ramifications and reputational damage the government that the FASEA reforms could trigger.

“The message from the minister and back benchers was that the original FASEA proposal will be mitigated and adjusted significantly. That’s the impression we got,” Mr Johnston said.

“Based on direct feedback from the committee and the positive support we received from the group, we feel FASEA will be greatly mitigating the legislative instruments [LI] due to be released next month.”

The committee has asked the AIOFP to provide direct and immediate feedback on the LIs, which will outline the terms and conditions of the FASEA reforms.

“Our message to all advisers is please wait until the LIs are released before making any medium- to long-term plans with your career and practice. The escape from this nightmare is going in the right direction. Putting pressure on your local federal member would also be a great idea,” Mr Johnston said.

The market has four weeks to respond to LIs once they are released. 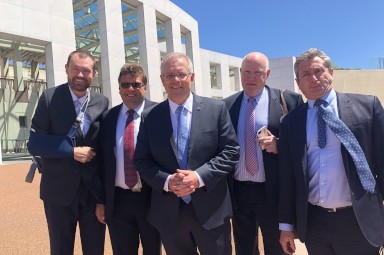