The RBA has announced the outcome of August's monetary policy meeting, which resulted in the official cash rate remaining 'on hold' at 1.5 per cent.

Today's decision marks the 22nd consecutive meeting that the RBA has sat on its hands (the bank meets every month except January).

Today's announcement does not come as a surprise to the market, which was pricing in a 100 per cent chance of 'no change' to the RBA's official cash rate.

The consensus among economists is that the RBA will not hike again until late 2019 or early 2020, which is broadly in line with the implied yield curve of the ASX futures market (see chart below). 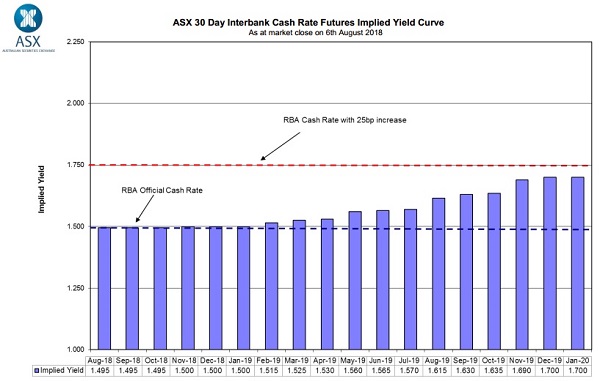 Why (and how) the big banks will return to advice

Advisers have implored the wealth giant’s largest shareholders to ask some “serious questions” about their fate at the company’s upcoming annu...

The government has released draft legislation around the establishment of the single disciplinary body for advisers, which will sit inside ASIC. ifa b...

More than 80 per cent of consumers now expect their retirement savings to be invested ethically, and adviser platforms are moving quickly to cater to ...