NAB distances itself from banned adviser

National Australia Bank has issued a statement clarifying its role in the banning and sentencing of former authorised representative Shane Thompson.

ASIC today announced that Thompson has been convicted and fined in the Melbourne Magistrates Court after pleading guilty to two charges of forging and submitting documents for financial gain.

In response to the sentencing, NAB executive general manager of wealth advice Greg Miller issued a statement welcoming the conviction.

“In March 2013, NAB terminated Mr Thompson’s employment after we discovered he had forged clients’ signatures in an attempt to increase his own remuneration at the expense of the NAB,” Mr Miller said.

“We expect our advisers to do the right thing at all times – by their customers and us as their employer, and we will always hold them to account.

“NAB subsequently reported Mr Thompson to ASIC, and fully supported the regulator’s investigations, and co-operated with the Commonwealth Director of Public Prosecutions.”

According to ASIC data, Thompson became an authorised representative of AMP Financial Planning after leaving the NAB network.

In 2016, Thompson was handed a seven-year ban from the corporate regulator.

NAB distances itself from banned adviser 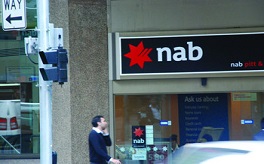