The US-backed acquisition of a Brisbane advice firm is “just the beginning”, with capital deployment to financial advice businesses set to snowball.

Focus is known colloquially in the American advice industry as an ‘aggregator’ – or sometimes by the more pejorative term ‘roll-up’ – and is part of an emerging and significant trend in the United States of increasing private equity influence in wealth management.

A successful credit facility in 2012 saw Focus pick up USD $320 million with support from major investors like Bank of America, JP Morgan and UBS, allowing it to make acquisitions of wealth management firms across the US and set its sights on international playing fields.

The next few years saw a flurry of M&A activity as prominent private equity investors such as Genstar Capital and Lovell Minnick snapped up leading registered investment advisor (RIA) firms, which have proliferated post-GFC as advisers fled the Wall Street institutions and their damaged reputations.

Focus is not the only organisation now experimenting with the ‘aggregation’ model in Australia.

Since opening its doors, AZ NGA has made 25 acquisitions of Australian financial advice firms, including the high profile purchase of CBA-aligned Eureka Whittaker Macnaught in June 2015.

Reflecting on his own success and the recent MW Lomax acquisition, Mr Barrett said he anticipates this private equity investment trend will only become more significant.

“This is just the beginning, I don’t think we have seen anything yet,” Mr Barrett told ifa. “The penny has dropped and smart capital is finding its way to financial planning assets themselves, not the licensee or manufacturing assets.

“Over the next decade or two this will become a very large new business model.”

Like much of the US aggregation boom, Focus has narrowed its investment to the RIA market, i.e. those firms registered with the Securities and Exchange Commission and independent of the household name financial institutions.

A senior executive with Manhattan-based RIA firm Hightower Advisors told ifa the investor demand for equity in non-institutional wealth management firms was so strong in the wake of the 2008-09 crash that his company had a PowerPoint pitch deck with just one word: independence.

With its investment in self-licensed firm WM Lomax, and subsequent acquisition of non-aligned Westwood, Focus seems to be taking a similar strategy Down Under, perhaps eager to capitalise on momentum towards the IFA sector.

However, Mr Barrett believes that playing in the non-aligned space is not necessarily optimal for private equity investors, having worked collaboratively with a number of bank-aligned licensees during his past acquisitions.

“The benefit of the larger, aligned dealer groups from the perspective of the investor is the governance and due diligence processes – these are actually really valuable,” he said.

While independent and non-aligned firms often enjoy greater freedoms to make technology, financial product and business model decisions than their aligned counterparts, this is not necessarily a benefit for capital investors, he explained.

“I see the institutional partner as a resource that can be quite helpful in ensuring we don’t back a loser,” he said.

Speaking to ifa in downtown San Francisco in late 2016, M&A consultant David Selig said the dominance of the major Australian financial institutions over the country’s advice firms was one of the issues holding back the floodgates.

Were that to change, many of the cashed-up aggregators and private equity players in the US may take a closer look at the ‘lucky country’, Mr Selig said.

With more than 600 advisers fleeing AMP in past 12 months and similar movements afoot elsewhere, the timing for foreign capital may just be right.

But having undergone the arduous process of connecting foreign investors with Australian capital-seeking practice principals, Mr Barrett has a word of warning for hungry newcomers.

“Coming into the market with the attitude that you are not going to deal with the banks at all is not the most healthy way of going about it,” he said.

“You have to work in a local market. You can’t ignore the regulatory forces and market forces of the place you are operating.”

Though they have now become trusted partners, Mr Barrett admits it took a long time to gain the trust of the larger dealer groups, who worried his offer of equity to aligned practices was some kind of suspicious distribution grab.

US investors sizing up the Australian market will need to be fluent in the language of the AFSL regime and understand the dealer obsession with risk, compliance and control.

But with evidence of a groundswell towards independent advice, it’s a chance they may be willing to take. 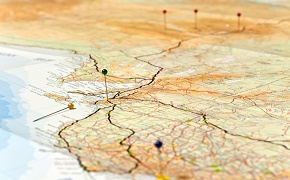