Ahead of Australia’s first IFA Convention back in September 2017, Nobel laureate and keynote speaker Dr Jose Ramos-Horta spoke to ifa about the Timorese journey to independence, peace and prosperity in the Asia-Pacific region and his message for the Australian financial services industry.

Aleks V.: Your Excellency, thank you for being with us today. I know that you're not an infrequent visitor to Australia but also very busy on the world stage, so we’re grateful for your time.

Aleks V.: I'd like to start with part of your personal journey, if I might. When did you first become politically active and become engaged in revolutionary ideas?

José R.: Politically active, socially active, but individually, without being involved in an organisation, in any planning, just, how you say, instinctively as a human being I began to be conscious and active and angry at issues of poverty when I was a teenager. But then, more when I was 19 years old and all had to do with poverty and injustices. Nothing to do with ideology, with politics or religion as such. I'm not motivated by ideology, I'm not motivated by a religious belief that you have to do this because the Bible says this, or the Koran says this or whatever. It is my conscience as a human being that tells me something is wrong and there is injustice.

Aleks V.: And so, that social justice imperative that you talk about there, how did that then lead you to the issue of independence?

José R.: Then, obviously, again, as a thinking person, you end up thinking, ‘Why should the people of East Timor be ruled by Portugal? Or by Indonesia? Or by Japan?’ People have the right to be free, to decide what form of government [they want], to have their own national flag, anthem, a constitution, their own elected leaders. For me – again, very basic. I don't sit down and grab books and read and be influenced by Marx, by Lenin, or by Buddha or by whoever.

I think these are a very basic, fundamental challenges to a human being's conscience, and it has to do with justice. Social justice, human dignity, independence for me has to do with that. Doesn't mean that the independence – formal, political and legal independence – means all the issues of social justice have been resolved. No, unfortunately, tragically, in so many countries that fought for freedom for independence from the Europeans, whether in Africa, Asia, Latin America, well, what independence brought to them [was] an oligarchy that replaced the old elites, the old colonial elites. The country has a flag, a national anthem and a government. Many are not even elected, but most of them are corrupt or robbing the people, even more than the Europeans had robbed.

So, it doesn't mean necessarily that having attained nominal, legal independence, sovereignty, that issues of social justice have been resolved.

Aleks V.: So, I suppose what you're saying is that independence is a very important theme for a people or for a group of people to have, but it's not quite enough.

José R.: Yeah. I have the greatest respect for the Australian defence forces.

In Timor-Leste, when they came in '99 and since then, have been super. Very disciplined, thousands of Australian forces, and I have to say, New Zealand, also, went through Timor-Leste over the years, really, literally thousands. Because they rotate every six months, every two years, every year, I don't recall the exact timing, so, through the years, many thousands went through and hardly there was a single incident of misbehaviour involving Australian forces against innocent local people. In fact, none.

So, I have greatest respect and they've done tremendous work in Timor-Leste over the years.

Aleks V.: And so, in terms of the current day, would you like to see Australia play a larger or a smaller role in the affairs of Timor-Leste, or in the region?

José R.: For reference, we're spending so much money, my understanding is more than $100 million in paying off pensions to so-called veterans. We need to look at how to transform these pensions [into] an investment because our people get the money and mostly spend it and it's unsustainable for our economy. I have discussed this matter with the incoming Prime Minister of Timor-Leste, Mr Mari Alkatiri, he's a very good, austere, strict money manager. And he is worried, like me, like the rest of us, on public expenditure. How to better manage our resources, our money, how to control public expenditure and how to convert these pensions that we pay off every month into an investment for the people, for the country.

So, independent financial service [providers] of Australia could come to Timor-Leste as a group, as individuals, meet with our government, our banking sector, and provide strategic advice on how Timor can better manage our financial situation. I have been arguing, and I made an approach to Dubai, for a while now, [to] look at how could Timor-Leste be a small financial centre in south-east Asia? Why not? We're strategically located, our taxes are among the lowest in the world, we do have good liquidity, we have like $16 billion in our sovereign fund, so how can we harness this and turn Timor-Leste into a respectable financial centre in south-east Asia?

Aleks V.: Just finally, Your Excellency, I know you've been very involved in the more recent years with global efforts for peace, through the United Nations and through other organisations. We do see rising tensions, particularly in the Asia-Pacific region. Are you optimistic about the possibility of ongoing peace and prosperity, and what should our top priorities be?

José R.: You know, I might have been the only person who, for the last 10 years, in a number of the speeches, of course, not many people read my speeches, which is a tragedy. I always said, "Contrary to this overly-optimistic view, that we are dealing with a rising Asia and that power, global power has shifted from the west, from Washington, to Asia, contrary to that," I say, "I'm sorry. My view, Asia is the most dangerous region of the world.”

So, these are some of the challenges that the UN, the world community, face and the world community is almost leaderless. Unlike post-World War II, where we had great leaders in the US, we had great leaders in Europe. Some of the greatest leaders came after World War II, through the '50s and '60s and up to the '70s. And so, right now, you know who we have in the US.

And then look at the UK, you know, with Brexit. How do these [leaders] feel they know what they're doing? You know, UK will become a little England, of old people in wheelchairs, out of the European Union. Instead of sticking together with the rest of Europe, they want to be different. Well, it's no longer the old Britannia. It will be an old, helpless, little old lady on a wheelchair, sitting somewhere on a street corner in Europe. So, this is the world situation today.

Aleks V.: Well, it sounds like we should be paying more attention to your speeches. José Ramos-Horta, thank you so much for being with us today. 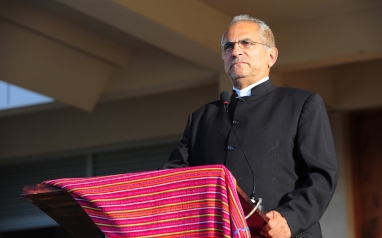