The fight to get it right

On the night of the 2017 ifa Excellence Awards, Canberra-based risk adviser Katherine Hayes knew there was a chance she would have to confront her fear of public speaking.

But any fears were well and truly banished by night’s end. She ended up taking home three awards: the Excellence Award, Risk Adviser of the Year and Client Service of the Year (Individual).

Her calm and collected speeches on stage in front of five hundred people did not betray the fear within.

In some ways, it’s a fitting reflection of the mountains she’s climbed and conquered since entering the industry.

“In 2008, I basically had three friends experience a death and two trauma incidences, and none of them had insurance – or at least nowhere near enough,” Ms Hayes says.

“So I tried to protect everybody I loved and knew and cared about. And for the next 12 months, I basically found myself doing basically nothing but risk advice.”

Ten years later, she is still providing risk advice to her clients. It’s clear that her professional and personal lives are totally intertwined, bringing a bottomless passion and personal touch into her client relationships.

“There’s a couple of things we keep really old school,” she says.

“I never like sticky envelopes on a letter – I like to hand-write addresses myself. When you go to the mail, it’s the first thing you want to see, just knowing there was a human on the other end of that.

“Every client will get a hand-written card from me with a message just saying thank you, and just letting them know that we are there for them or their family.”

This degree of dedication to her clients hasn’t wavered one bit through the years, and it’s no wonder she’s being recognised for it in the Client Service of the Year (Individual) Award. But just as much as it’s about getting things right, Ms Hayes knows what’s at stake for her clients.

“It sounds a bit funny, but it’s the consequences of not getting it right,” she says. “Because I’ve been there.”

In her own words, she confesses: “I’m a big, fat, bleeding heart.”

“I take on pro-bono cases whenever I’ve got the capacity. I only ever take on one at a time because they’re so involved … If I hear a story of someone who’s in trouble and I don’t have one on, I’ll actively seek to take on pro-bono work,” she says.

Being able to see the tangible difference she makes in peoples’ lives has buoyed her fervour for doing what she does.

“I can’t change what’s happened, but at least I can remove the financial consequences, which can make real differences and outcomes for families – especially when there are kids involved.”

Rising to the challenge

It’s worth noting that Ms Hayes’ commitment as a financial service professional perhaps owes itself to her devotedness as a mother.

She’s had to deal with her own struggles as a parent, but in the process, she’s found it’s also made her a better risk adviser.

“I have three boys. And two of them, I think I put on my awards submission, I described as ‘they don’t fit into the realm of normal’, just in terms of diagnosis and accessing NDIS services,” she says.

“When you've got two kids that don't fit into the normal mould, they need more from you. Kids are a challenge when they're normal. When they’re not normal, there’s extra work.”

The emotional heartache and finding stability and has been the hardest part, she admits – but she’s risen to the challenge.

“You grow, and your capacity grows,” she says.

“That's just what we've had to do – just making sure I can grow as much as I've needed to.

“To be able to be good in as many areas as I can be, as wife, mother, business owner, adviser.”

Though she’s won a stunning count of three awards, she’s crystal clear about one thing: her role as an adviser could never take priority over her role as a mother.

But luckily, she’s never had to choose. And at Tiffen & Co, she says, she’s received the support needed to flourish in both roles.

“I've just been very, very clear from day dot - I don't work Fridays. So, Friday is my family day. My ‘life admin’,” she says.

“And it’s a little bit of having a really supportive husband. It’s been a really big help. It does help a lot.”

The fight to get it right 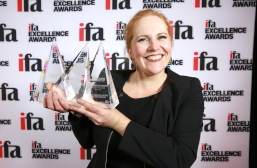