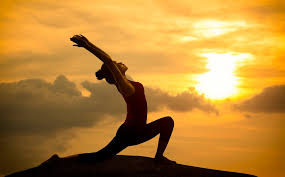 For Lea Scodel, yoga is more than just a physical exercise. Instead, she says, it is a philosophy which has not only helped shape her life, but also her career as a financial adviser.

“By studying yoga it sort of opened up my own perspective of things,” Ms Schodel says.

“Yoga is often translated as ‘skill in action’ and what we learn on the mat, we can apply to other aspects of our lives as well.”
Ms Schodel says while a lot of the terms used in yoga can apply to most facets of life, it was her realisation that it could also apply to financial advice that gave her the idea to introduce it as a part of her service model.

“I was on the mat studying yoga and I thought a lot of the things I was hearing and learning about were just metaphors for what we talk about in financial planning,” she says.

Phrases such as “keep your focus on your own mat”, “focus on building a solid foundation” and “keeping to the edges of your mat” were all metaphors that could be applied to financial advice, Ms Schodel explains.

Having recently established a new financial planning business – called MHP Private Wealth – Ms Schodel’s idea could not have been timed better as it presented her with the opportunity to make it a reality.

“It was a good opportunity to re-evaluate my service model,” she says. “I have a real passion for it so I thought how can I incorporate that into my advice and do it through workshops which would ultimately educate and empower people.”

“Also, looking at my client base, all of them are pretty much female, and all of them have passion for, or are working in the health and wellness industry, so it just sort of made sense,” she says.

With that goal in mind Ms Schodel established Find Your Flow, a wealth coaching and yoga business aimed at educating and empowering her clients.

Helping clients find their ‘flow’
Now, nearly 11 months on from her “light-bulb moment” Ms Schodel is running workshops with local health and wellness groups and teaching people about their finances all through yoga.

“The concept is really unique and a lot of people ask ‘How does that even relate?’. Once I start to explain they really start to get it.
“I work with a number of health and wellness groups – so there are a few entrepreneurial things in Brisbane which I work with and I also work with a number of yoga studios,” Ms Schodel says. “We do workshops talking about money, personality and beliefs and the basics of managing money.”

Although while her workshops are “really taking off”, Ms Schodel adds she is still looking to perfect the way in which she conducts them.

“It’s different, I am still sort of creating it as I go because there is nothing out there to use as a framework,” she says.
However, Ms Schodel’s eagerness to help improve Australians’ financial literacy doesn’t stop there, in fact she also volunteers with a group called Joining Hands as a ‘give back’ ambassador.

“I give financial planning advice and do workshops for homeless youth,” Ms Schodel says. “Also, I work with the Gold Coast Homeless Project and some other similar places that are aimed at helping teach children – particularly between the ages of 16 and 20 – how to manage money.”

Meditating on the future
Helping Australians find their “flow” is a core part of Ms Schodel’s value proposition and with her efforts extending beyond helping clients in a traditional client-facing manner, she is determined to grow and make it an even bigger part of her role as an adviser.

“I have a really big plan to do more workshops in this space,” Ms Schodel says. “I want to spread the message of taking financial wellness seriously across Australia, and even globally if I could.”

“The workshops are a good lead to gaining clients and it will be my little funnel, but I really want to educate them first so when we work together I am not actually giving advice, I am empowering them to make their own financial decisions.”

Ms Schodel added that technology will also play a key role for her in the future as she looks to incorporate more online educational tools as part of her service to better improve her clients’ financial literacy.

“I use the Innergi Financial Knowledge Centre for financial literacy,” she says.

“I provide it to all my clients free – and I just try and encourage them to take control of their financial literacy.

“There are modules, articles, videos and they are all on finance but then there are also wellness topics as well – I want to incorporate more of that,” Ms Schodel says.

“Going forward I would like to continue just growing and spreading my message as much as possible.”